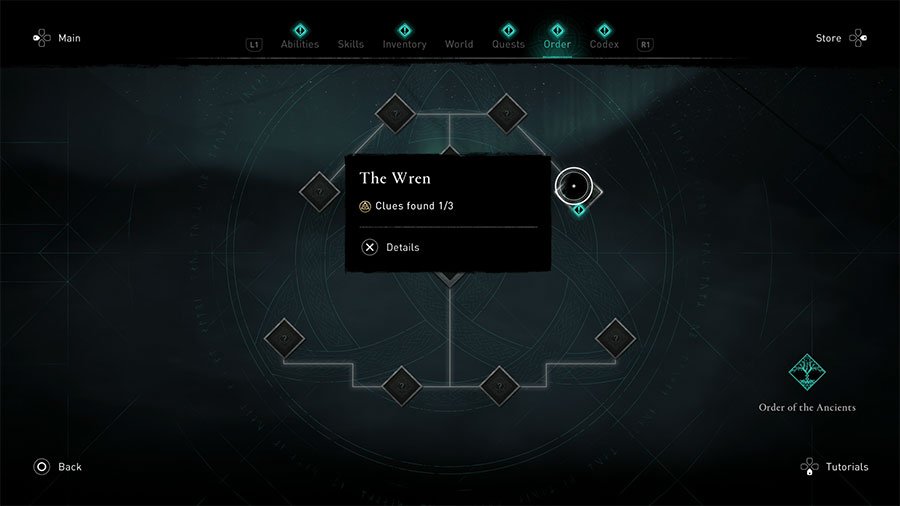 There is a cottage next to the docks here. Inside you will find the document you need sitting atop a barrel. 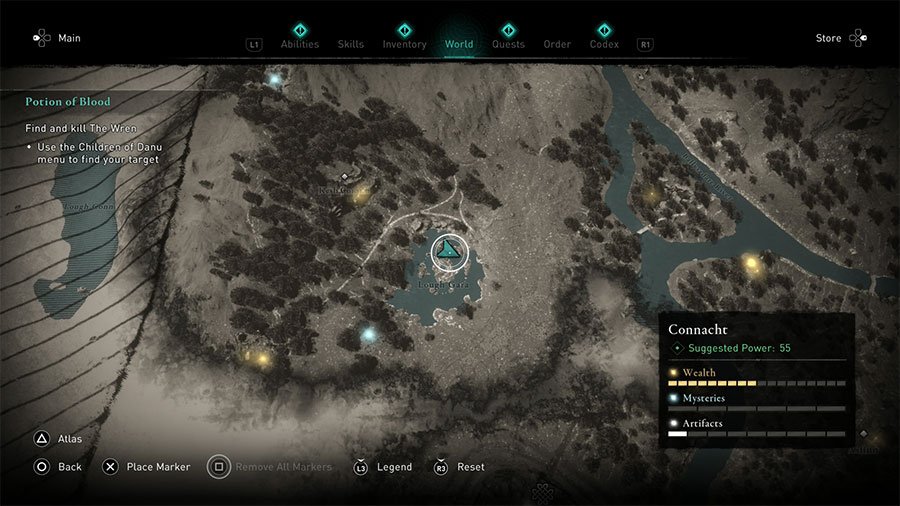 In the Northern center part of Lough Gara, there’s a chest and some crates. You’ll find the clue sitting atop the crates. 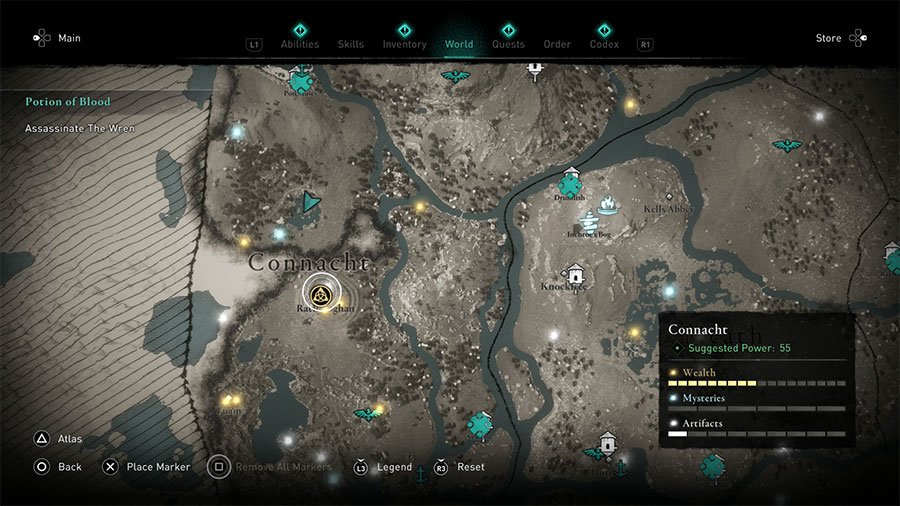 Once you have both the previous clues you will get the location of your target. The Wren can be found in Rathcroghan. 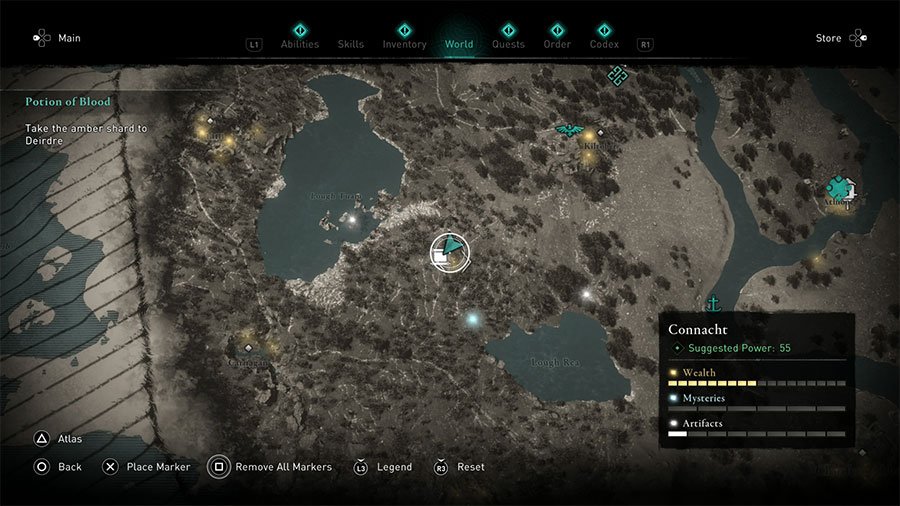 After you kill The Wren, you will unlock the first clue for this member. This one asks you to find a Druidic Ritual site between Lough Rea and Lough Tuam. Head to this location and loot the center piece of the site to find the clue. 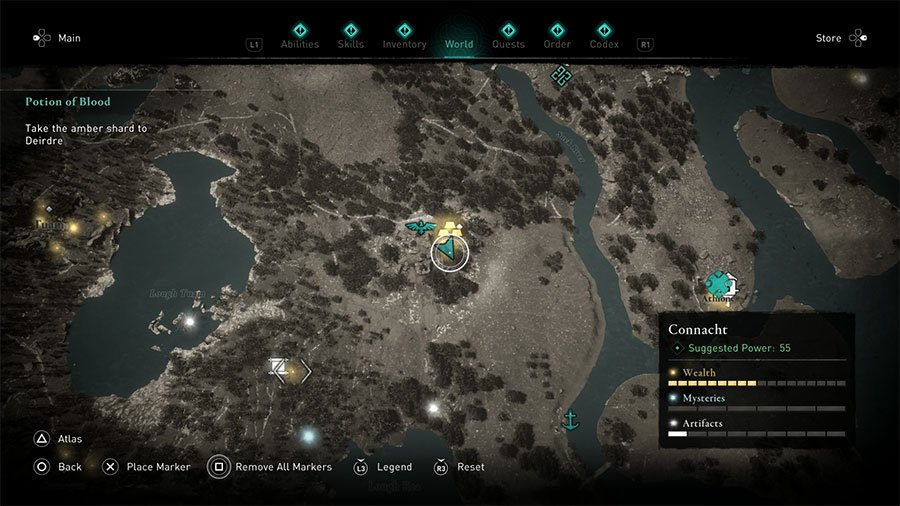 Next up you’re told to investigate Kiltober down the rocky summit Southeast of Rathcroghan in Connacht. There is an enemy camp of druids at this location. Search the main tent to find the clue. 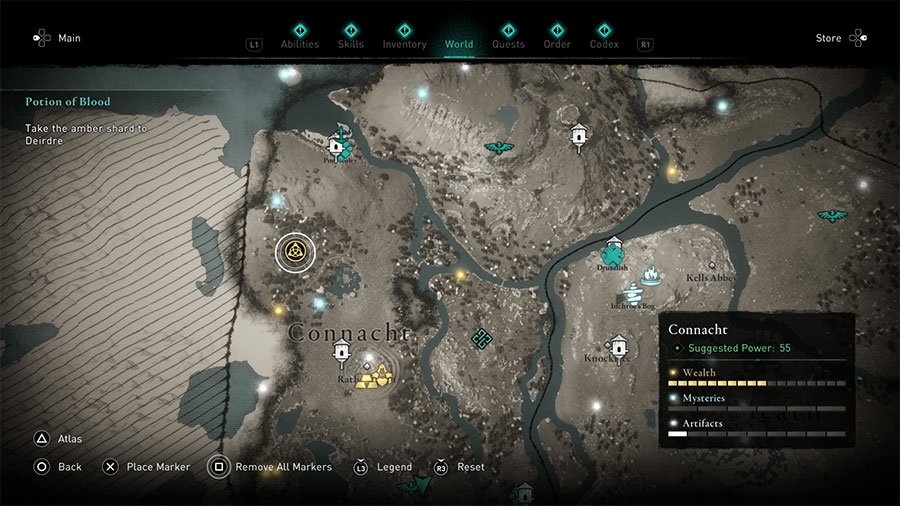 Now you can mark your target on the map and hunt down The Ash. He is underground in a cave, the entrance is just to the East in Kesh Corann.

The Cursed Clue Location #1
After you kill The Wren, you will unlock the first clue for this member. It’s part of the main story. Simply return the Amber Shard you received to Ciara. 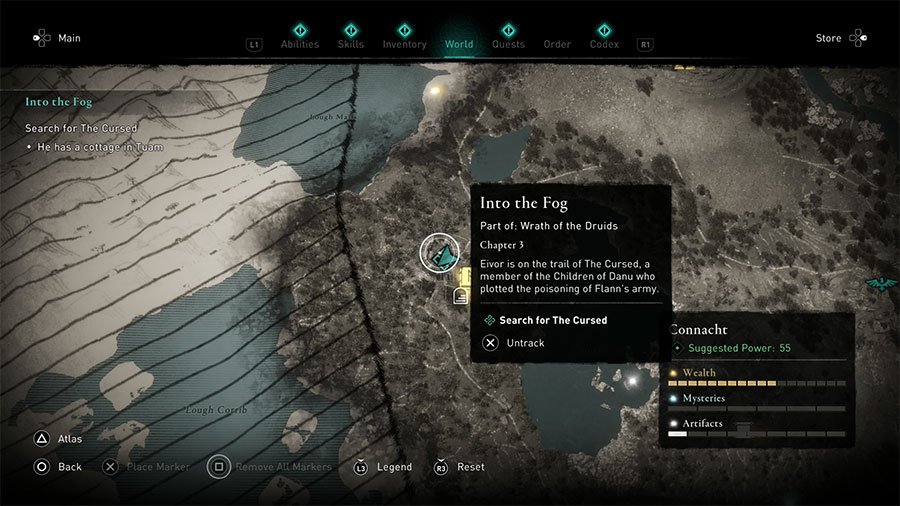 After you get the potion to cure the soldiers, as part of the story, you will get the next clue that reads investigate Tuam, a village in Western Connacht. The location is marked by the story quest. There’s a locked cottage, the clue is inside. 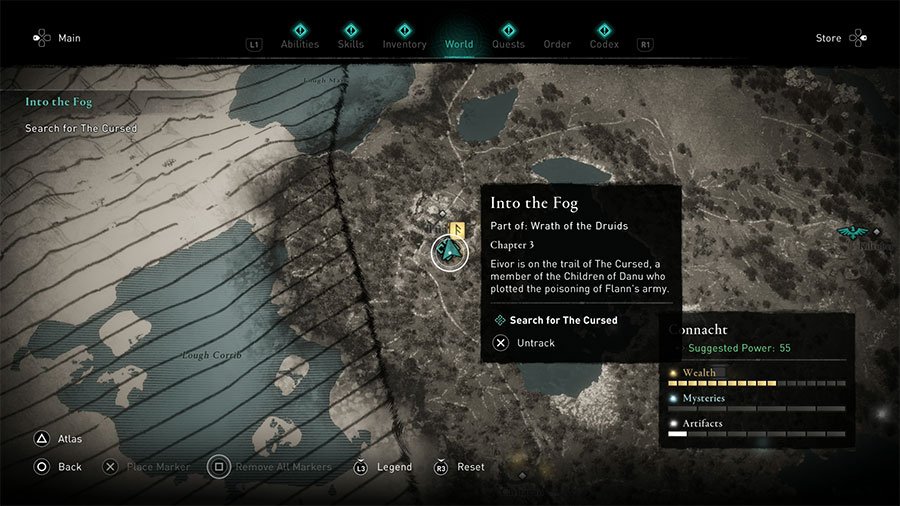 There is a large hole in the Earth that leads down into the caves.

Once you’ve found all the clues in the cave, you will need to leave and speak with Ciara. The rest of this is a story mission with easy to follow objectives and a rough fight at the end. 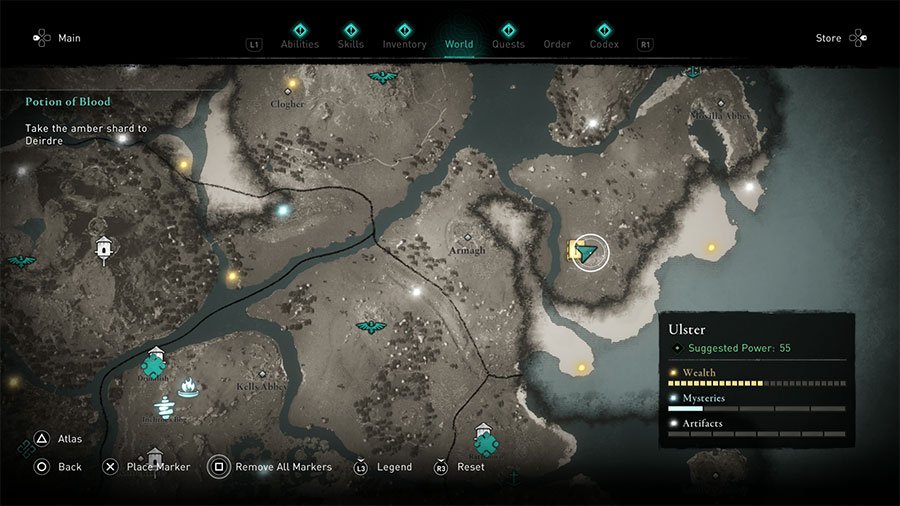 After you kill The Ash, you will receive a clue for the first one for The Blaze. The first clue tasks you with investigating a gravesite near the waterfall in Bally na Gall, a burned village along the Bann River in Ulster. Head to this location and look for the grave at the foot of the waterfall 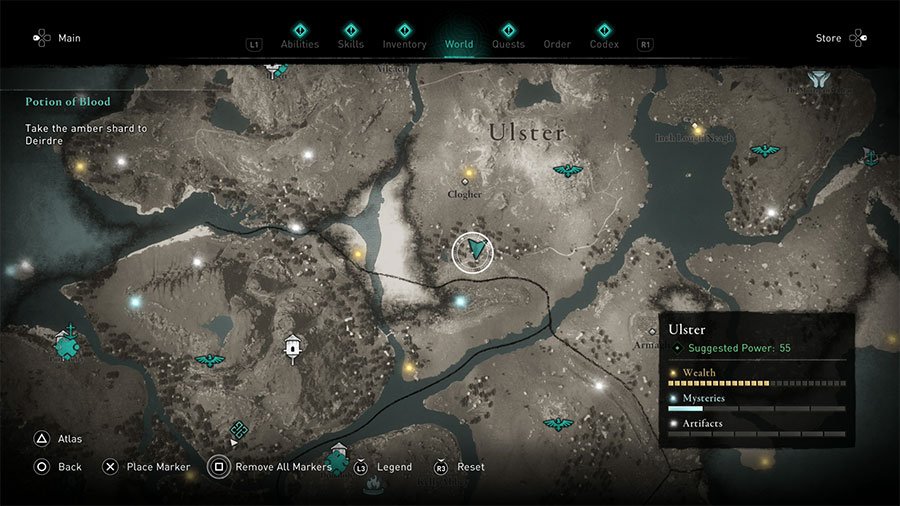 The next clue asks you to investigate burned houses between Black Pig’s Dyke and Clogher in Ulster. Head to this location. There are a number of burned cottages here but one remains intact. Search that building for the clue. 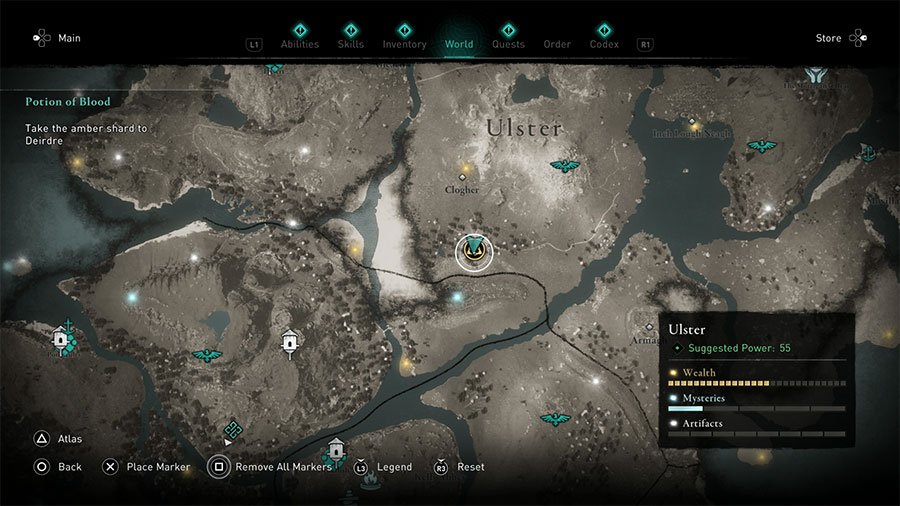 Random luck I was attacked by The Blaze as I was searching for the clue but his general location is in this area. 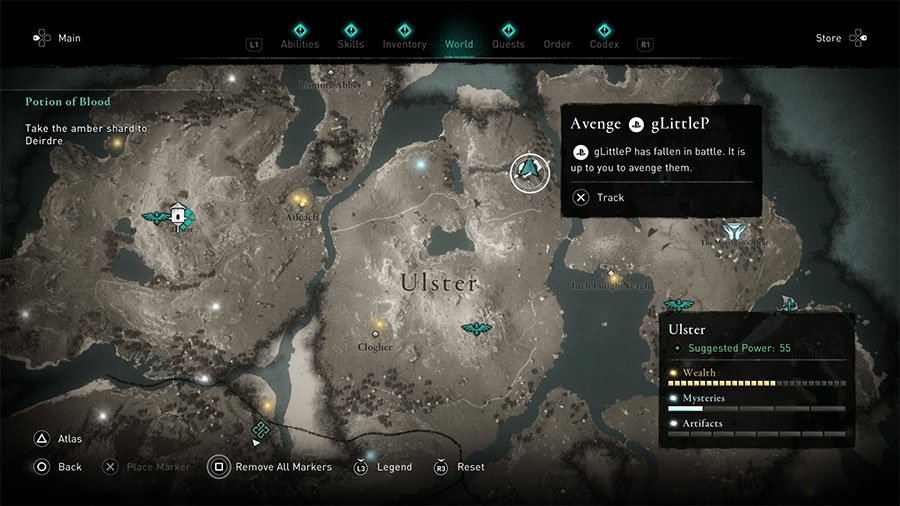 After you kill The Blaze, you will receive your first clue for The Mist. It tells you to investigate Doon Daven stone circle in Ulster, West of the Slaney River. Head to this location. There’s a camp of druids here, clear them out. Then investigate the wicker-style statue in the center of the stone circle, you’ll find the clue at its feet. Sorry gLittleP, I got stuffs to do. 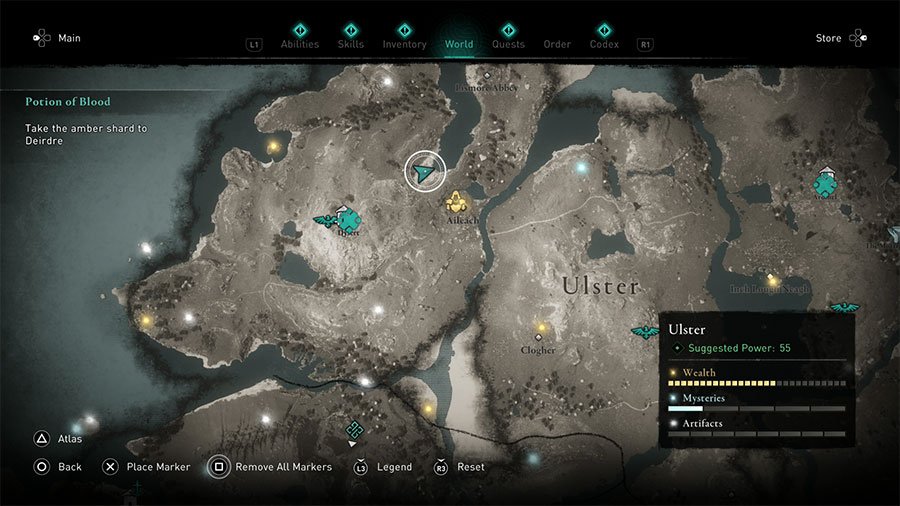 The next clue for The Mist can be found by searching a decaying boat run aground in Ulster’s peninsula near the Foyne Reservoir. Check near the main wreckage here. There’s a small stone altar with a dead bird sitting on top of it. The clue can be found there. 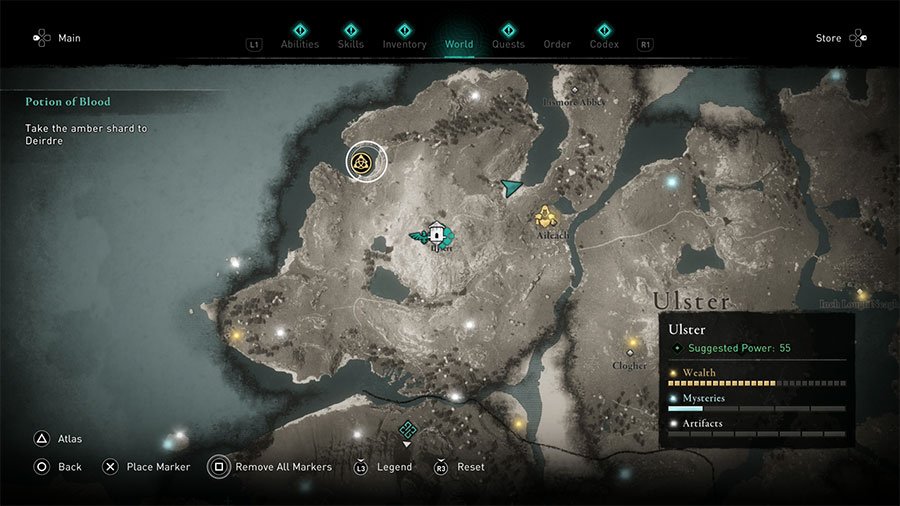 Once you have both of the other clues, you can mark The Mist on your map and hunt him down. 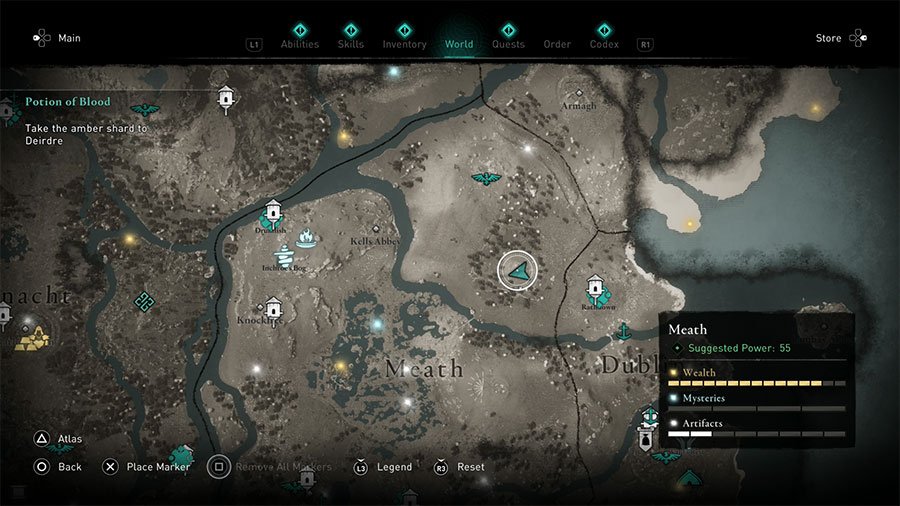 After you defeat The Mist, you will obtain the first clue for The Whisper. It reads, investigate Boyne Tombs, a forested hill West of Rathdown Trade Post in Northern Meath. Head to this location. The clue is sitting on a crate near three red jars atop the tomb. You do not have to go inside, the clue is on the top. 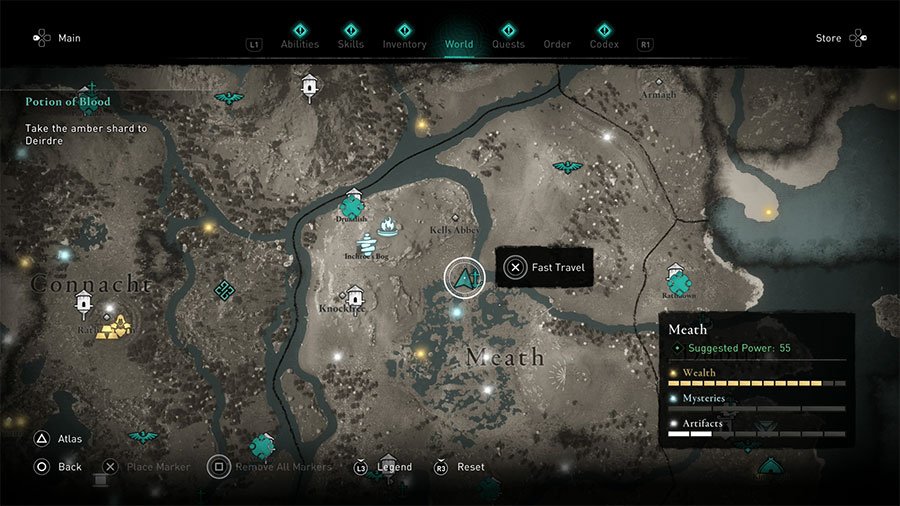 For this clue you’re told to investigate a stone ritual circle near a small harbor on Boyne River. There’s a small altar near the dock at this location. Grab the clue that’s sitting on top. 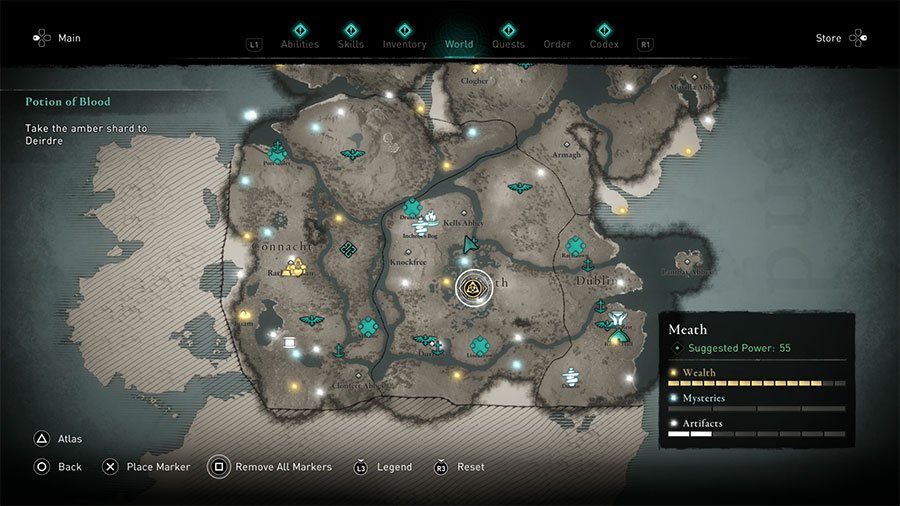 Once you have both of the other clues, you can find your target in the center of Meath 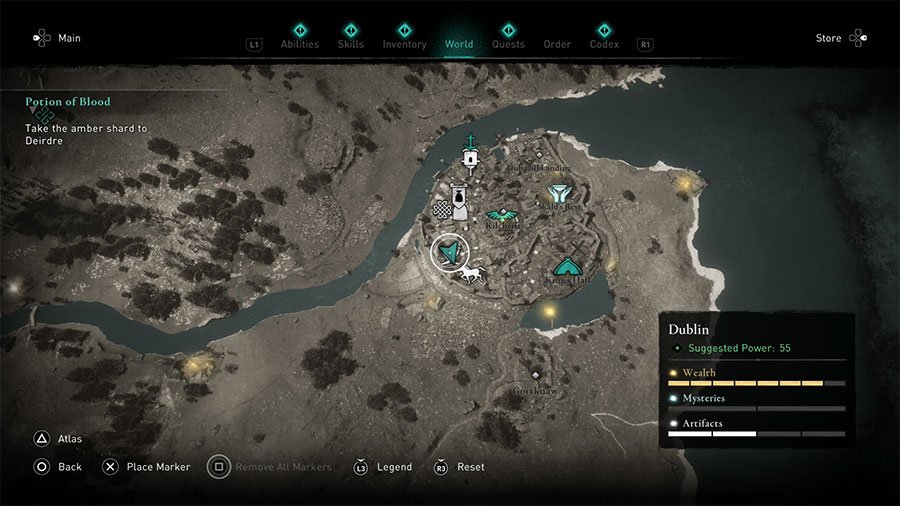 After you kill The Whisper, you will receive your first clue for The Spider. This first clue requires you to beat the drinking champion in Dublin’s Alehouse. Head to this location and win the drinking game. 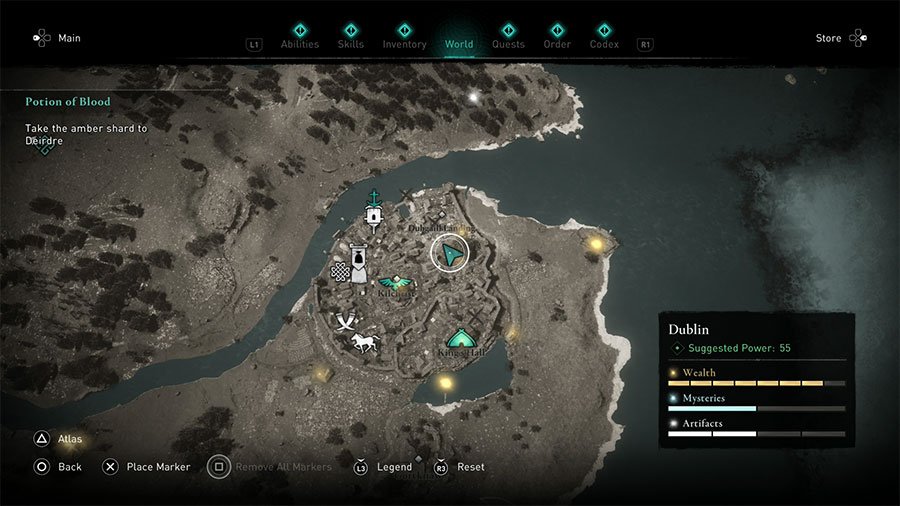 Your next clue reads investigate in the vicinity of the tallest tree in Dublin. Huge tree in the East of town, can’t miss it. There’s also an altar there to sacrifice items at for a Mystery. There’s a woman sitting on a small bench. The note can be seen beside her, not far from the tree. 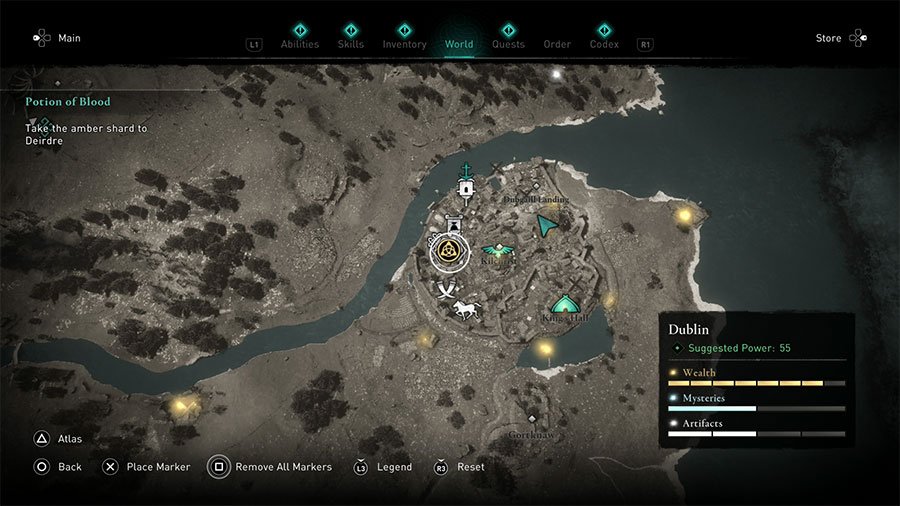 After you have the first two clues, hunt down your target. 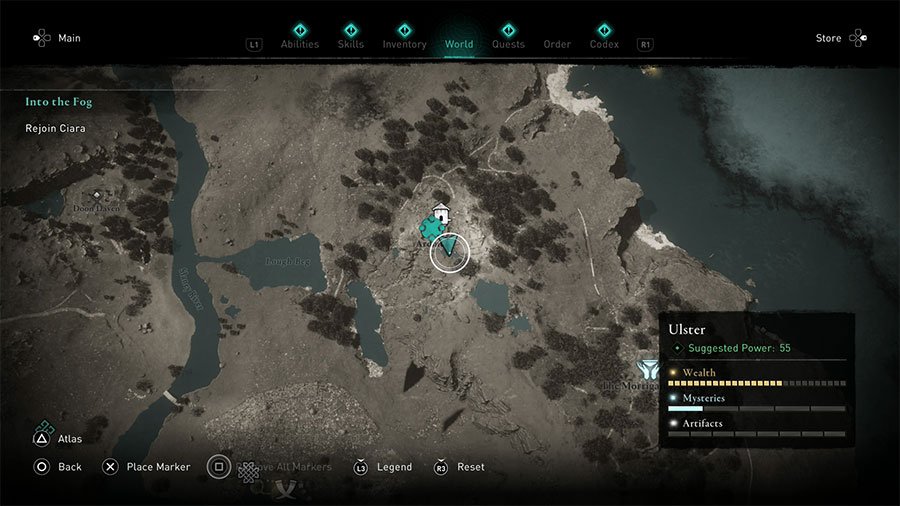 I killed all of the other members above and then completed the story objectives for The Cursed, then I received this clue. It reads, investigate Ardmel Trade Post in Eastern Ulster, East of Lough Beg. There’s a small jetty here that sits over a small pond, the clue is next to the jetty. 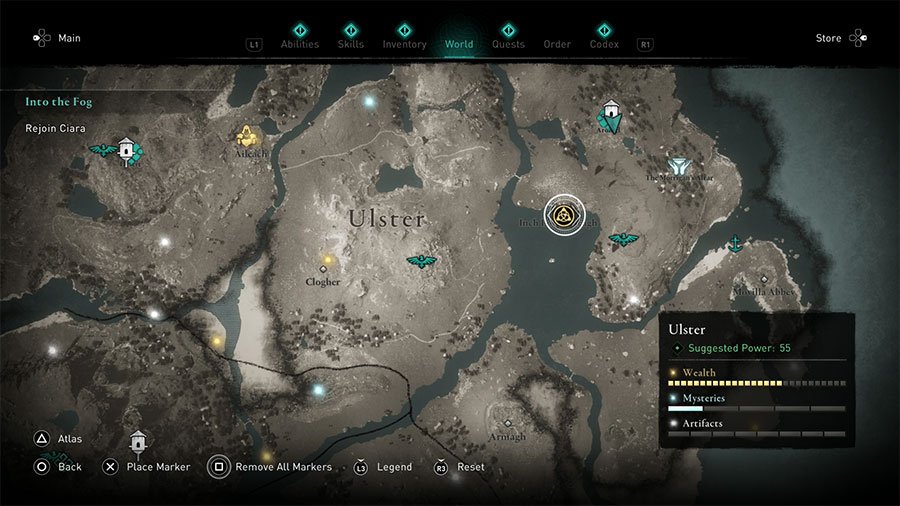 After you get the first clue, you can mark your target on the map.

After you defeat The Deer, you will get the first clue for The Seed. It reads, when in Ireland, The Seed will be found in Dunseverick fortress. Ignore this clue. You cannot find him in Dunseverick castle at this point in the game. I don’t want to spoil any part of the story but progress through until a major event. After the major event you will be told to hunt down The Seed. You’re then given the next clue. Investigate Movilla Abbey on the upper bay of Ulster’s Eastern Peninsula. Head to the Abbey and search the main building. The clue can be seen sitting on one of the church benches. Now that you’ve done this part of the story, The Seed will actually appear in Dunseverick Fortress, so head up there and take him out.

The Oak Clue Location #1
Once you have killed The Seed, you will have The Oak’s identity confirmed. Unlike previous targets, you cannot mark this target. Follow A Scourging of Snakes, the main story quest from this point, and you will get your chance to take down The Oak.

Now you’ve killed all of the Children of Danu, be sure to use Bloody Amber to claim your reward.

There is a choice at the end of the Siege of Paris DLC that determines a characters fate. This AC Valhalla Siege Of Paris No Way To Find Peace Or I Will Kill You Choice guide will tell you the consequences of your actions depending on the choice you make, so you can best choose the decision that reflects your vision of Eivor's future.
Tags
Game Guides PC Guides PlayStation 4 Guides PlayStation 5 Guides Xbox One Guides Xbox Series X Guides

Blaine "Captain Camper" Smith is one of the original founders of Gamers Heroes. Now operating under the guise of Editor-in-Chief (purely because we felt the position was needed for public relations purposes), he's tasked with a lot of the kind of jobs that would put you to sleep at your desk. When he's not catching some Zs, you'll likely find him arguing points he knows nothing about, playing the latest rogue-like he'll never complete, or breaking something on the website that never needed fixing. You can best reach him on Twitter
Latest Reviews
Advertisement
Facebook Twitter WhatsApp Telegram
Back to top button
Close
Close
Close