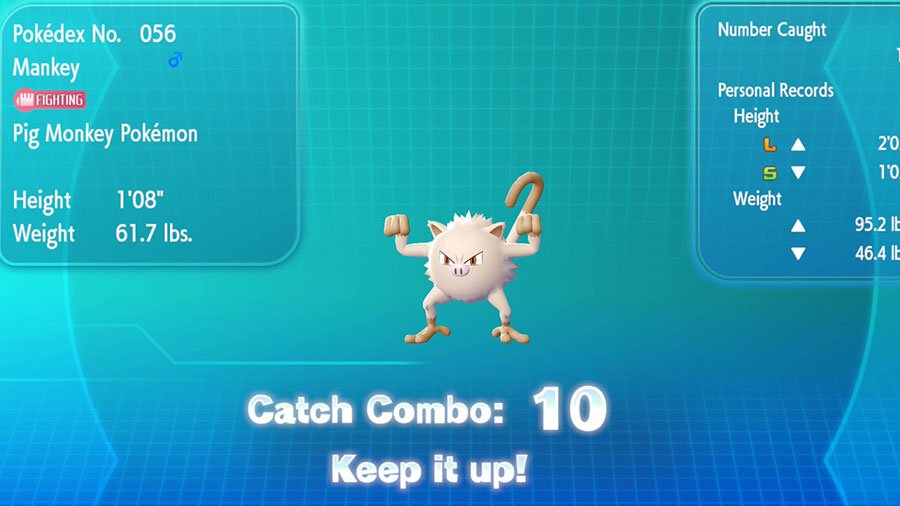 We explain everything Catch Combo related in this How To Increase Catch Combo And What Does It Do In Pokemon Let’s Go guide as we walk you through the basic of the catch combo mechanic and the different benefits you can receive from doing it.

The Catch Combo mechanic has long been a feature of the Pokemon games, however it’s usually been a more hidden mechanic. In Pokemon Let’s Go Pikachu and Pokemon Let’s Go Eevee, it plays a much more obvious role. Whenever you catch more than the same type of Pokemon consecutively, this increases your Catch Combo.

Catching any other Pokemon at any other time resets the Catch Combo. You can leave an area, heal up, purchase more Pokeballs and return, the Catch Combo will remain the same. A higher Catch Combo has a chance at spawning better nature and higher stat Pokemon. It also greatly increases the chances of spawning a Shiny version of a Pokemon, and finally, it also influences nearby Pokemon spawns – such as how to catch Charmander in Pokemon Let’s Go.

That’s How To Increase Catch Combo And What Does It Do In Pokemon Let’s Go. Any questions? Post a comment below.

Want to add another legendary bird to your Pokemon collection? This guide tells you Where To Find Legendary Bird Moltres In Pokemon Let's Go so you can your team can hunt down the legendary fire creature, catch him and take him into battle against the Elite Four.

Want to add the electric legendary bird to your Pokemon collection? Follow this guide to find out Where To Find Legendary Bird Zapdos In Pokemon Let's Go Eevee & Pikachu so you can track him down, get through the Power Plant and claim Zapdos as your own.

Want to explore the Power Plant on your Pokemon Adventure? Follow this guide to learn How To Get To The Power Plant In Pokemon Let's Go Eevee & Pikachu so you can check out some really powerful electric Pokemon and maybe even net yourself a legendary bird.

Where To Find Ditto In Pokemon Let’s Go Eevee & Pikachu

Want to catch a Ditto to add to your Pokemon team? This guide will tell you Where To Find Ditto In Pokemon Let's Go Eevee & Pikachu which involves exploring one of the most challenging caves in the game and potentially, even an encounter with Mewtwo.
ShareTweet
Tags
Game Guides Nintendo Switch Guides