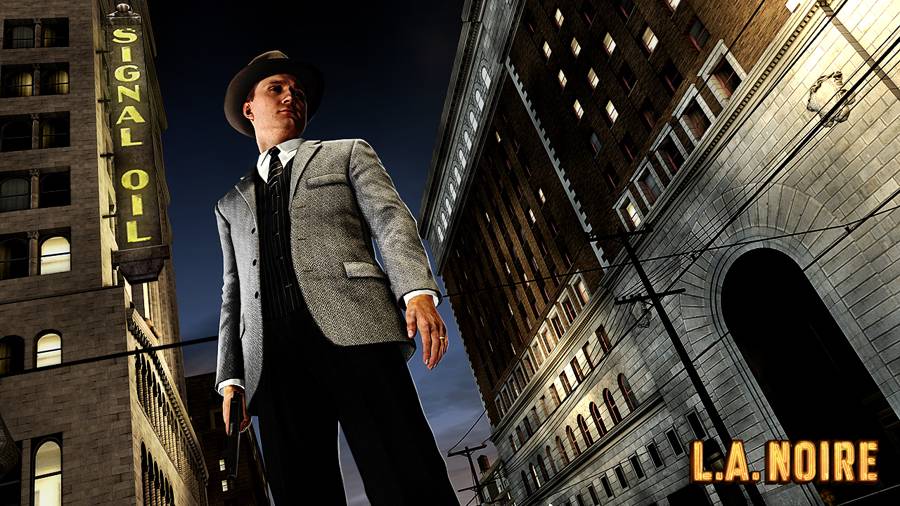 The newest DLC in L.A. Noire is called Nicholson Electroplating. This guide will help you get the 5 star rating, answer all the questions correctly and find all the clues. This case is in arson if you can’t find it. Let’s get started!The first thing you do in the L.A Noire Nicholson Electroplating guide is head for the big explosion. What a way to start a case. Keep driving until the flag pops up and head to it. Once you get there you will have to shoot down some looters. After that follow your partner into the crime scene. After the cut scene we will look for some clues.

Clue 1 Laundry tag – From where you start go until you can make a left. Make that left and go until you can go straight or make a right. Go straight and you should see some burnt clothes on the ground. A cop was checking it out in my game.

Clue 2 Airplane part – From the Laundry tag take the path to the right instead of straight. At the end of the path completely a cop will say hey check this out. Do so and match the letters with each other to make a word.

Clue 3 Spy camera/espionage – Go back to the laundry tag and go straight. You will see a locker. Check the contents inside the case.

Clue 4 Undeciphered message. This one is a bit tricky. You have to figure out the message. What you need to do is put the H under the red needle. Then the K below that. From there do each letter K S B O J L K Q X S B using the outer wheel. It will give you an address.

Clue 5 Blue business card. Check the blue card above the wheel. After that head out. You will get a cut scene and start questioning Fred Nicholson.

Question 2 Whereabouts of Okamoto. Pick lie and use Spy camera.

Question 3 Whereabouts of McLellan. Pick doubt. After that go use the phone. Now it is time to leave.

The next part of the L.A Noire Nicholson Electroplating guide is heading to Superior Laundry services. Once you get in talk to the man behind the counter. He will be rude and tell you to look in the ledger yourself. Looking for j2620. After that use the phone. Turns out this guy doesn’t have an address. After that time to leave.

The next part of the L.A Noire Nicholson Electroplating guide is going to the Deciphered Address. Once you get there check the mailboxes for an address. She is in number 1. Walk in and search for clues.

Clue 1 Ring – Open the refrigerator and a body will fall out. Check his hand for a ring.

Clue 2 Wristwatch – Check his other hand for a watch. Check his head as well it’s not a clue but you get a POI.

Clue 3 Tie Pin – Check in front of the fire place. Move it around to get the clue.

Clue 4 Microfilm – Go into the room and check the desk above the drawers. After that go use the phone. After that it is time to leave.

The next part of the L.A Noire Nicholson Electroplating guide is at the Hughes Aircraft. After the cut scene follow the guy. Then you will get to ask him some questions.

Question 3 Knowledge of McLellan. Pick lie and use the Prop spinner. Now time to find some clues.

Clue 1 Linseed Oil – Head to the plane. Next to the steps are some barrels check them.

Clue 2 Navigation note – Go into the plane and climb the ladder. One the board with the blue prints if where this clue is.

Clue 3 Bahamas – Sit on the desk with a chair and make the latitude and longitude correct.

Not a clue but head towards the back of the room and you should see some engines. Walk to them and Phelps will look at them.

Clue 4 Unknown address/Photograph – Head up to the office in the corner. go up the stairs and check the photos in the back. After that it’s time to go.

The next part of the L.A Noire Nicholson Electroplating guide is heading to the Police station. Once there head downstairs and talk to Pinkerton. He will tell you to check some photos.

The second photo focus on the watch and ring the man is wearing.

On the third photo check the tie pin on the second guy.

The fourth photo you want to focus on the chemical compound.

The fifth photo you want to focus on the two people walking.

Clue Aluminum Polishing Paint – Right behind the desk with the photos. Easily missable to be careful.

The last photo you want to check the number on the door. After that Pinkerton will ask you to help him with something. Put one drop in the container and boom. After that it is time to go.

The next part of the L.A Noire Nicholson Electroplating guide is heading to the House in Photograph. Once you get there walk into the door that is already open. Check the desk next to the drawers and open the passport. After a couple pages you will figure something out. Then someone will throw fire into the house. You have to blow up the tank next to the stove and escape through the path it opens. After that you will have to chase the guy down in a car. He takes some pretty sharp turns so watch your speed. He will also send out help so push them off the road if you have to.

Once he stops you will have a fire fight. Get a gun out of the back if you want. I recommend the Tommy gun. Stay behind cover and mow them down. After they are dead go into the base. They will have more people firing at you. Yet again stay behind cover and take them out. After you kill everyone you will get a cut scene.

That will end the L.A Noire Nicholson Electroplating guide. As long as you didn’t do much city damage or hit anyone you should get the 5 star rating. Look forward to the next case!