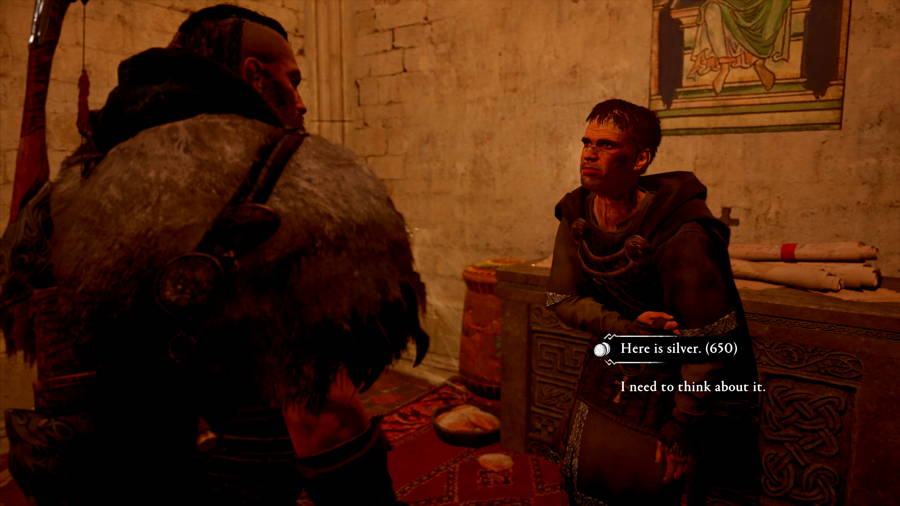 Another choice you will get in AC Valhalla is who you want to give a ton of silver to. Check out this guide to find out who to give the silver to in Assassin’s Creed Valhalla. This way you don’t pick the wrong person and just waste the silver on nothing.

Who To Give The Silver In AC Valhalla

You will have three choices on who to give it to. To let you know, this doesn’t matter a ton because the peace talks will be over soon.

Give the silver to Ynyr AP Cadfarch
Ynyr AP Cadfarch is the captain of the guard of King Rhodri and has the kings ear. You will ask him if the silver will help Ynyr persuade his king and Ynyr says he will try. You then give him the gold and the events go down in the church, ruining the peace talks. You will fun into Ynyr later and kill him, but you don’t get the silver off his body, just his spear. He must have spent it real quick.

Gwriad
Gwriad is King Rhondi’s brother and is the reason everyone is in this spot. You ask if he can be persuaded to rebel against his brother and then bring peace to the area. He agrees and you give him 650 silver with the expectation of his aid. He dies moments later and you can loot the silver off his body. This is the outcome that gets you the most silver.

Angharad
Angharad is the queen of the Britons and you can offer her the 650 silver. She says the kingdom is low on funds and that silver would go a long way to helping her husband consider peace. You pay her and she thanks you and says she will ensure there is peace. Then the event happens in the church and peace talks are off. Later, the queen gives you a pin worth 38 silver and says thanks for the silver. The next peace talks go better, but the end result is the same, war with King Rhondi.