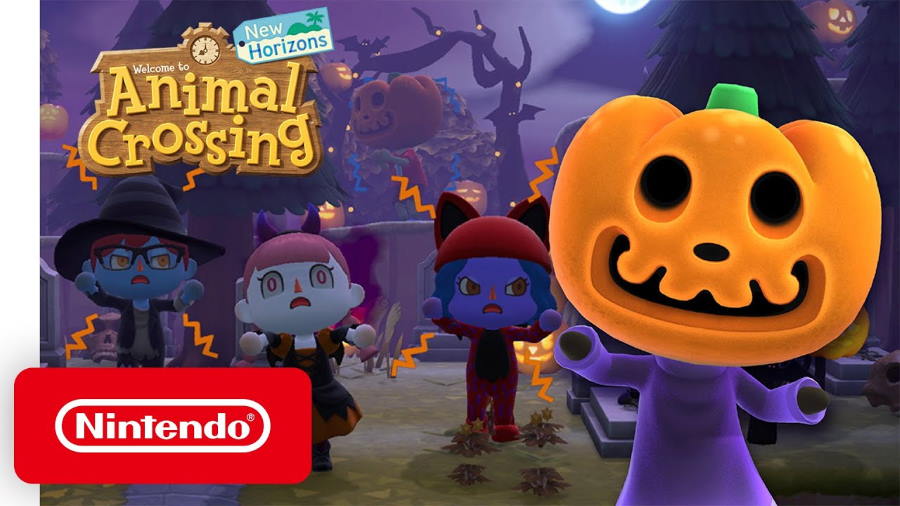 Starting September 30, players will be able to experience a fall wonderland in Nintendo’s Animal Crossing: New Horizons as part of a free update.

Players will be able to grow pumpkins by paying a visit to Leif (year-round) or from Nook’s Cranny (during October). From there, players can take advantage of a number of pumpkin-based DIY projects.

Halloween costumes like a mage’s dress can be yours at the Able Sisters shop throughout October. Body paint and colored eye contacts can also be yours by exchanging Nook Miles. Halloween DIY projects from your fellow residents can be found, and neighbors will also get into the spooky spirit on Halloween night with their own costumes.

After 5pm on October 31, neighbors will make their way to the decorated plaza. The mysterious guest Jack wants lollipops and candy, and giving him what he wants will earn you spooky in-game rewards. Save some candy for your neighbors as well, or you might find yourself getting pranked. New Reactions to properly express your feelings of fear can also be learned.

To make things easier, players can easily revisit dreams from a list.

Finally, the NookLink Service in the Nintendo Switch Online smartphone app will receive an update in early October. With the update, you’ll be able to use your smart device to perform Reactions in the console version.

To go alongside this news, Nintendo announced that the Nintendo Switch — Animal Crossing: New Horizons Edition system will return to participating retailers for $299.99. The system features pastel blue and green Joy-Con controllers, along with a white Nintendo Switch dock that features Tom Nook and Nooklings Timmy and Tommy.

[testimonials user=” email=” name=” position=” photo=”]“For players that have yet to create their personal island paradise in Animal Crossing: New Horizons, now is a great time to get started. Players who enjoyed their islands during the spring and summer will find new ways to play when they experience the new festive activities that fall has to offer.”[/testimonials]
Source: Press Release