EA Sports continue to build hype for the greatest selling football franchise in gaming with a barrage of news coming out of this years Gamescom as the developers lift the lid on all things FIFA 15. Players can look forward to rewritten AI for goalkeepers, including 50 new animations, realistic player models and more responsive behavior. I give it 2 days before the next KSI kick-off glitch is discovered.

The improvements to the AI that governs the goalkeepers of FIFA 15, accompanied by the new behavioral changes and improvements to animations, should help to address a problem that has been plaguing FIFA for years and one the community is not afraid to voice.

[quote style=’1′ cite=” title=”]“We’re delivering innovations and improvements that have been at the top of our fans’ wish list: new goalkeepers, more responsive gameplay, and the Turkish Süper Lig,” said David Rutter, Vice President and General Manager at EA. “This year we’ve put the game in the hands of fans earlier than ever before, listened, and delivered what they want in gameplay, authenticity, and modes.”[/quote]

EA Sports also revealed details on other elements of FIFA 15 including some new features for Ultimate Team mode, a vastly improved EA SPORTS Football Club with real-time football updates from around the world, and the debut of new Legends exclusively for the Xbox One and Xbox 360.

Ultimate Team mode has been updated to feature a new Concept Squad option. The new options provided by Concept Squads gives players the opportunity to build a squad consisting of any players in the entire game, giving them the tools to evaluate chemistry and fine tune tactics before making any larger-than-life purchases. It’s basically FUTHead but in the game client itself. The second most notable addition to Ultimate Team is the ability to loan some of the most famous names it football and add them to your roster for limited periods of time.

FIFA fans of the Xbox variety can also look forward to recruiting even more of their sporting heroes with the introduction of 14 brand new players including Roy Keane, Peter Schmeichel, Alan Shearer, Roberto Carlos and Jay Jay Okocha. Check out more details on the Legends below: 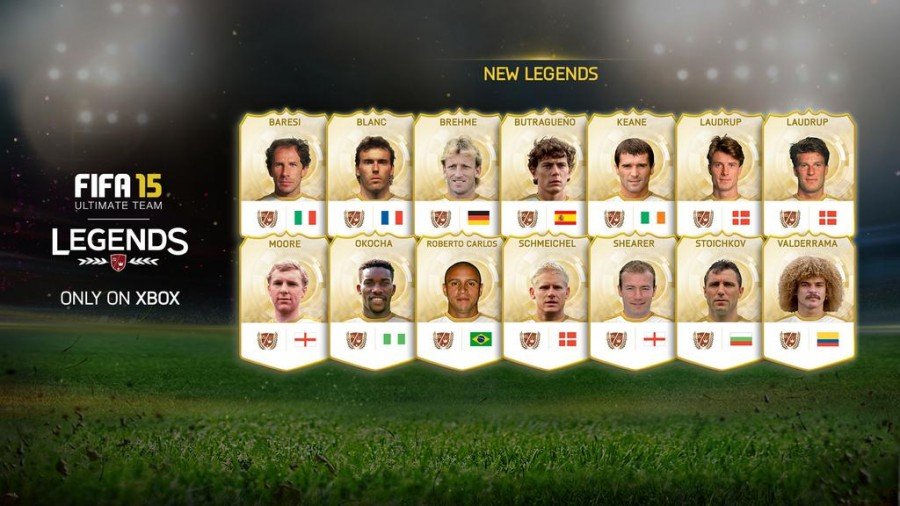