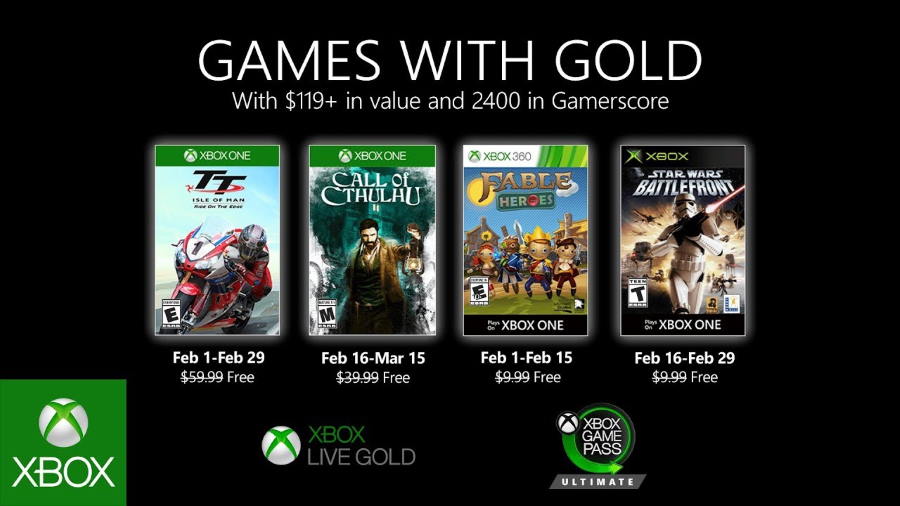 The February 2020 Games with Gold lineup will include TT Isle of Man, Call of Cthulhu, Fable Heroes, and the original Star Wars Battlefront.

Developed by Kylotonn, TT Isle of Man: Ride On The Edge pays host to 24 riders, 38 bikes, and a number of different sidecars. Accurate ride physics have been captured, and a Career Mode inspired by TT with training and qualifying rounds has also been included.

Cyanide and Focus Home Interactive Call of Cthulhu combines investigation and stealth gameplay with themes of Lovecraftian and psychological horror. Players will take control of Edward Pierce as he ventures off to Darkwater Island to look into the case of the Hawkins family.

Lionhead Studios’s Fable Heroes is a beat ’em up set in the Fable universe that features 4 player online and local co-op. For those familiar with the series, Chesty, Hobbes, Beetles and Hollow Men all make an appearance.

Finally, Star Wars Battlefront was originally released for the Xbox and was created by Pandemic. Several locales and factions from major Star Wars battles, including the Galactic Republic and the Confederacy of Independent Systems from the prequel era, and the Rebel Alliance and the Galactic Empire from the original trilogy, have been included.

Learn more about the different colorful planets of Blind Squirrel Games and SEGA’s Sonic Colors: Ultimate with the latest trailer for the game.
ShareTweet
Tags
News Xbox One News