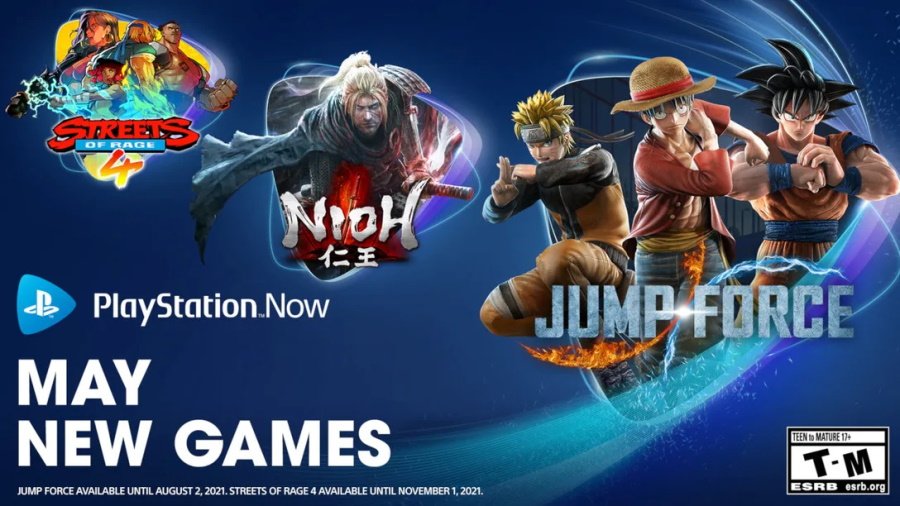 PlayStation Now subscribers will be able to grab Jump Force, Nioh, and Streets of Rage 4 this May.

Bandai Namco’s Jump Force takes a number of popular manga fighters from the Shonen Jump series and throws them together to fight in battle. After players create their own character, they’ll be able to meet staples from One Piece, Dragon Ball, Naruto, Hunter X Hunter, Bleach, Yu-Gi-Oh!, Yu Yu Hakusho, and Saint Seiya.

Taking place during Japan’s Sengoku period, Team Ninja’s Nioh has players filling in the shoes of Irish sailor turned samurai William Adams as he defeats countless monsters. Stamina management and different sword stances factor into play, and Amrita can be used to improve your abilities.

Finally, Dotemu, Lizardcube, and Guard Crush Games’ Streets of Rage 4 is a beat-em-up that transports players to the streets of Wood Oak City. Attacks, throws, and Blitz Moves, and special moves are all at your disposal as you set out to take down the Y twins. You can read our review of the game here, which we gave a respectable 90/100.