A generic game like this one unsurprisingly has a generic plot to match. Delta City is under attack by DeathBot’s army, and mayor Lamowitz’s daughter has been kidnapped. It’s up to you, Atomic Adam, to rid the streets of evil and save the day. You’ve no doubt seen this type of story before, and outside of some brief conversations with NPCs and enemies, there’s not much to go off of.

Rather, Atomic Adam lets his fists do the talking. Other beat-em-ups like Final Fight and Streets of Rage vary things up with a number of different moves and enemy patterns, but this hero doesn’t have time for all of that. Rather, he possesses a punch attack and a kick that don’t offer much variety. When he starts punching, he ends up going into a combo that launches him across the screen at enemies and flings him into the air. Any semblance of control is thrown out the window during these parts, but this attack works well for the majority of the game.

If anything, players will see the entirety of what the game has to offer in the first five or so minutes. Atomic Adam will face off against throngs of the same bland mouse, clown, and alien archetypes throughout each of the three levels, and even bosses like the alien demon and blue “Chummy Bear” are hopelessly generic. Upwards of 20 enemies can crowd the screen, and though the main character possesses a block move, the best strategy is to mash the punch button and hope for the best. There is a super “Atomic Power” move that can get you out of a pinch, but this is not a strategic game. There are times where the game gives you a jetpack or a rideable creature, but these come off as gimmicky and don’t add to the game in the long run. 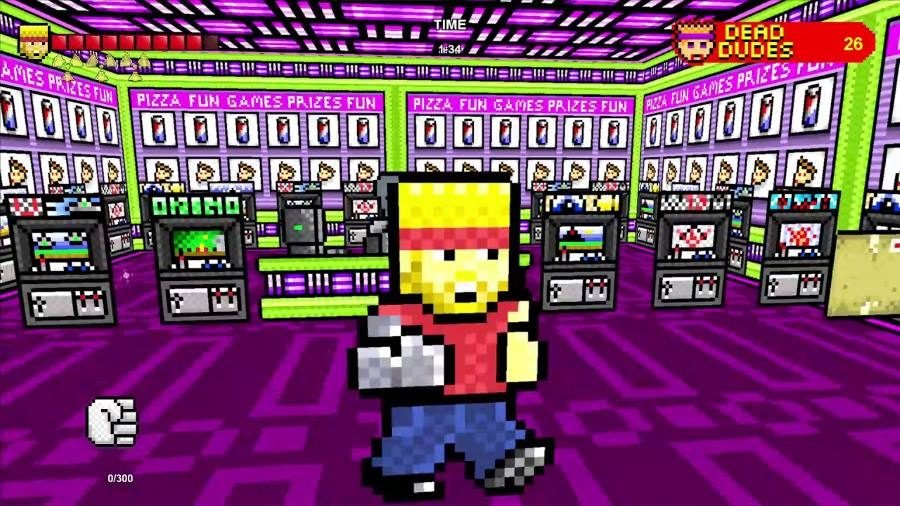 There are also a number of weapons that can be picked up throughout the game, including chainsaws, electricity-spewing guns, and swords. However, mashing is your only course of action with these weapons, and they run out of ammunition (even the swords) far too fast. There were times in the game where the game accidently offered infinite ammo, but this was obviously a mistake.

If anything, the game has a number of bugs. Despite the game only taking an hour to beat, we got stuck in walls, entered buildings that locked the game into a black screen (and required a soft reset), and also saw enemies get stuck behind fences. The three-dimensional map doesn’t mesh well with the two-dimensional sprites either, making navigation tough and making it tough to avoid projectiles or measure the distance needed to land a blow. Put simply, it feels poorly designed.

This review of Atomic Adam: Episode 1 was written based on the Steam version of the game. The game was purchased digitally.
Tags
Casey Scheld Reviews Game Reviews PC Reviews