G.O.D.S. is an interesting proof of concept that could have used more content. Though there is not a ton of variety, the sheer amount of chaos and unpredictability of its hockey mode is worth a go for those jonesing for a unique multiplayer title.

Twin-stick shooters get thrust into the world of competitive play with the release of MECH’AT and Plug In Digital’s Galactic Orbital Death Sport (G.O.D.S.). Does the world of dodging bullets pair well with deathmatch stylings, or should you not take up the fight?

Unlike typical shumps, G.O.D.S. is a multiplayer extravaganza. Players can choose the ship of their choice before hitting the field, which vary by HP, speed, firing rate, and firing power. This should have offered a decent amount of strategy to proceedings, but the indistinct look of each one and minor variations do not make them stand out too much. As a result, the victor is usually determined by who is the best pilot, and who has the best team.

There are three different modes to choose from in G.O.D.S.: Hockey, Death Match, and King of the Hill. Death Match is the free-for-all that you’d expect, but that is not necessarily a bad thing. The large playfields and rapid fire means that battles are quick and dangerous, and the dash mechanic helps players get out of a tight spot. There are also a number of power-ups that can be secured on the battlefield, from your standard double and triple shots to freakin’ lazer beams that can instantly obliterate opponents. A faster speed for each ship would have been ideal (even amongst the speediest ones and the temporary speed power-up), but what is present here gets the job done. 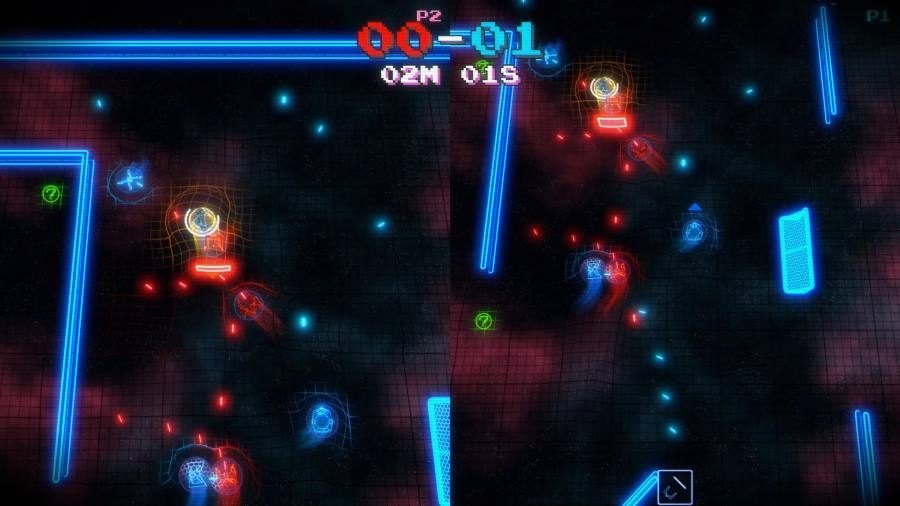 Hockey is perhaps the most unique mode the game has to offer. Players are divvied up into two teams, and must score as many goals in a set amount of time. The amount of fire and activity means that death is imminent at any given time, but it keeps things interesting. When players have the ball, it more or less encompasses their ship, so they become a huge liability. The key to victory is to pass the ball to others, and achieve synchronicity as a team. Those playing against the AI will have a miserable time, but get enough people together and you’ll have an absolute blast.

The final mode is King of the Hill, which works as you’d expect it to. The set amount of real estate and lack of cover or defense options makes this mode less than ideal, but it’s certainly welcome.

There are a number of different variables players can tinker with, but with only four stages to choose from, the lack of variety somewhat hinders the game in the long run. If this title had twice as many stages, it would have far more lasting power among those more inclined to multiplayer games.

G.O.D.S. is an interesting proof of concept that could have used more content. Though there is not a ton of variety, the sheer amount of chaos and unpredictability of its hockey mode is worth a go for those jonesing for a unique multiplayer title.

This review of Galactic Orbital Death Sport was done on the PC. The game was purchased digitally.

Marvel's Guardians of the Galaxy follows the old-school approach to game design, something that feels quite odd saying, even today. It's a single player, narrative-driven experience. There's no microtransactions, no store, no needless multiplayer component thrown on, no game as a service, it's just a good ol' fashioned game, and a bloody incredible one at that.

When our pets leave us for the rainbow bridge, we’d like to think they’re off to a better place. However, Purple Tree thinks of something far more grim for these furry fellows with their new sports game Pets No More. Should pets be reanimated for some arcade action, or should this title be put out to pasture?

Combining shmup action with roguelike elements, Lost Machine Games’ TechBeat Heart is poised to deliver synthwave stylings with over-the-top action. Should players immerse themselves with this pairing, or does it try to do too much?

Anime fighters seem like a dime a dozen these days; does CyberConnect 2 and SEGA's Demon Slayer -Kimetsu no Yaiba- The Hinokami Chronicles stand out above the noise, or is it another anime cash-in? Check out our review and find out.
ShareTweet
Tags
Casey Scheld Reviews Game Reviews PC Reviews