It’s you against the world in Hyperbolic Ignition. Players take control of a ship that enters a series of wormholes to get where it needs to go. The trouble is, each area is made up of a number of enemy ships that all want to take you down. It’s like you’ve come unprepared though – armed with both primary and secondary weapons, a bomb, and a shield, it’s up to you to make it out in one piece and get a high score.

It’s a pretty basic setup, one that arcade aficionados will know right away. The omnipresent leaderboards will make you want to go further each time, and an endless mode can be unlocked that will test your might. After taking down a series of ships, the boss of the stage appears. Take down the boss, and a wormhole appears that leads to a new area with new foes.

Unfortunately, there is not a ton of variety here. Most enemies have a generic look to them and don’t have half a brain between them, dashing right into you with fire aplenty. Each stage takes place in a looping arena too, meaning that enemy swarms can quickly be thwarted by crossing over from one edge of the screen to the other. Everything takes place across a black background with some stars, which is not only plain, but tough to distinguish from enemy fire. The same goes with the four mini wormholes that appear in the corners of each stage – though they’re intended for a quick escape, it only provides a brief moment of respite. 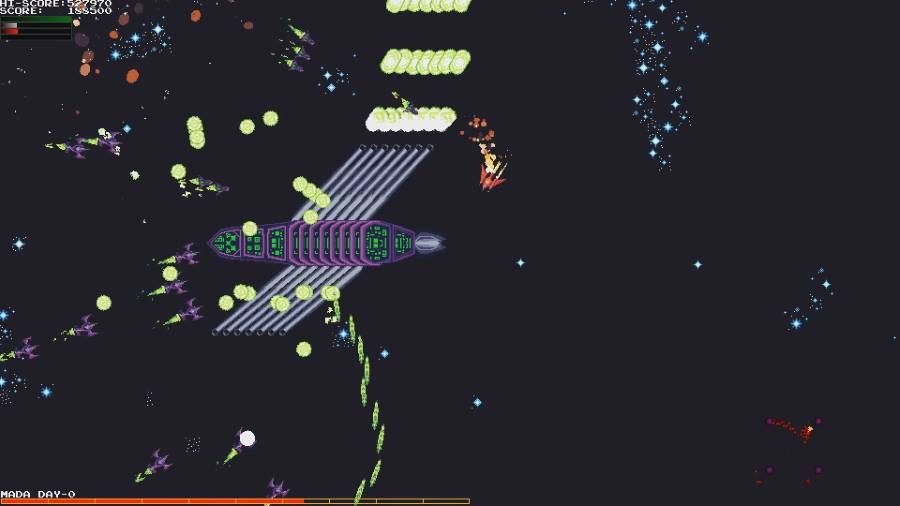 This boils down to the strategy for dispersing of enemies too. Those looking to take on the enemies of Hyperbolic Ignition head on will get hit – no ifs, ands, or buts. Sure, there is a shield with a cooldown meter and a rechargeable health, but no amount of skill in the world will prevent you from getting hit. Rather, the key to victory is to tediously lay down bombs and have enemies run over them. Utilizing this strategy gets old fast, and makes levels last far longer than they have any right to. Put simply, playing to win is not fun at all.

Those who don’t mind getting hit can mix up their fire by picking up powerups on the battlefield. Consisting of such fire rates as shotgun, missile, and scattershot, these random pickups don’t always give you an advantage. The secondary fire has a cooldown, but it too can provide a brief advantage.

Rounding out the game is a momentum system that takes some getting used to. Your ship in Hyperbolic Ignition does not stop on a dime, making it tough to navigate tight areas.

This review of Hyperbolic Ignition was written based on the Steam version of the game. The game was purchased digitally.
ShareTweet
Tags
Casey Scheld Reviews Game Reviews PC Reviews