Make Me Lag might have a one-note premise, but the idea of messing with the framerate of a game to get ahead is a novel one that at the very least serves as a curiosity for even the beefiest of rigs.

Those who are part of the “PC Master Race” live and die by the amount of frames their rig can push out, but 4H StudioLab wants gamers to think differently with their new title Make Me Lag. Should players show things down, or should players go back to the world of consoles?

The odds are stacked against the player in Make Me Lag – a Dragon, a Golem, and a Kraken all stand in the way of you and victory. As the lag hero, it’s up to the player to vanquish these terrible beasts, but there’s a catch – his movements are tied to your average framerate.

Needless to say, those with a beefy NVIDIA 2080ti GPU will be at a loss of what to do. There are a number of real-life strategies players can use to come out ahead – running Crysis, opening multiple tabs in Chrome, rendering a video in Adobe Premiere, or even messing with the programming of the game are all viable options in this title. However, those looking to take the easy way out by moving the window around will be scolded by the player and eventually labeled a cheater (with the achievement to prove it) if they continue with those shenanigans. 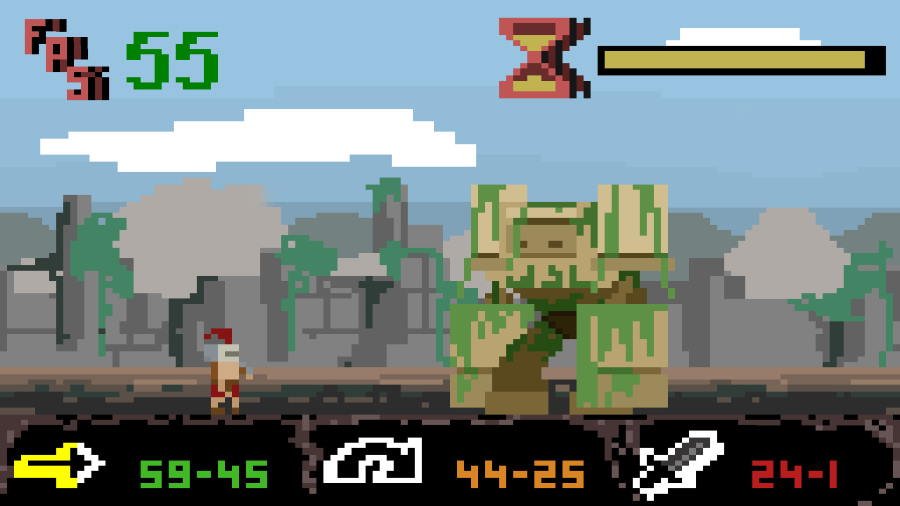 It’s a unique concept for a game, even if players aren’t hitting buttons to achieve their goal. Adjusting the framerate at any given time serves as one of the most unique control schemes we’ve seen to date, and though there is the potential to make your computer overheat (or at the very least become ornery), we do think that this is a refreshing take.

Those worried that they might break their computer in the long term need not worry, as this is a short title. Vanquishing the three beasts can be done in 10-15 minutes, although there is an additional achievement for those that have really slowed down their machine.

It’s just odd that a game with this type of premise has a presentation that leaves something to be desired. The pixelated artwork looks muddy and roughshod, and though the humor is there, it just feels like the presentation is an afterthought. Also, while this proves to be a fun experiment, it is one that is more of a novelty than anything else. There are a number of Steam comments and YouTube videos that show how to quickly beat this title without too much effort, so those looking for a fresh experience should avoid these “spoilers” the best they can.

Make Me Lag might have a one-note premise, but the idea of messing with the framerate of a game to get ahead is a novel one that at the very least serves as a curiosity for even the beefiest of rigs.

This review of Make Me Lag was done on the PC. The game was freely downloaded.

Trapezium Development Studio says nuts to the driving sims of the world with Sparks - Episode One, a title described by the team as a “happy non-violent arcade racing game” (their words, not ours). The market’s already got plenty of casual racing titles in the form of the Forza Horizon and Mario Kart series - does this title have what it takes to stand out?

After a minor delay, EA DICE and Electronic Arts' Battlefield 2042 has hit the scene. Is the game worth checking out, or should you play a different shooter this holiday season? Check out our review and find out.

The love for alpacas is universal - anybody who says otherwise most likely lacks a soul. Sebastian Baracaldo, Michelle Ma, and Spookulele Games have paid tribute to this one-of-a-kind animal with their new 3D platformer Alpaca Stacka. Combining hide-and-seek gameplay with a storybook world, should players take the reins of this fuzzy fellow?

Keyboard warriors might not be able to enter the Olympics any time soon, but we can certainly give our fingers a workout with the release of NowakGames’ retro-style sports title World CHAMPIONS: Decathlon. With a number of events waiting to be tackled, should players hit the track (and field)?
ShareTweet
Tags
Casey Scheld Reviews Game Reviews PC Reviews