Moonlighter is an exciting action adventure-shop simulator game that shouldn't be skipped. If you have any interest in running a shop and dungeon diving, then this game is for you.

Moonlighter attempts to combine shop simulation gameplay with the rogue-lite genre. Is this a match made in heaven, or should this game be put in the bargain bin? Check out our review and find out.

When you start Moonlighter, you play as an unnamed protagonist delving into a dungeon. You are taught the basics, and then killed to show how quickly you can die. Upon returning to town, you find out you are a shop owner by day and a dungeon crawler by night. The basic idea is simple: loot dungeons at night and sell the loot during the day. Does he sleep? Not if you don’t want him to. To make the right amount of money, you have to clear dungeons and get keys to the next dungeons. Trouble is, you have to start at the first level of a dungeon if you leave without a portal. Players are presented with a choice: do I spend more money to start at a low level in the dungeon, or do I take the exit for cheap and earn more cash? Be careful though, as the wrong decision could cost you an upgrade or a new piece of equipment.

Reading that, you might think that you need to do the same sections multiple times. All dungeon floors are randomly generated, and there are secret rooms in each dungeons as well. Being randomly generated means you don’t run into the same floor plan often; just the same enemies. Enemies drop the loot you need to sell though, so running into them is ultimately what you should strive for. In total there are four dungeons, each with three floors. The last floor has the dungeon boss, and beating them will get you the key to the next dungeon. Killing the bosses will also get you a key to the sealed door that no one has been able to open. By killing all four and getting all four keys, players will finally encounter the final boss.

Moonlighter is presented in a top-down fashion, with combat feeling similar to The Legend of Zelda: A Link to the Past and Enter the Gungeon. It is properly classified as a rogue-lite, meaning you don’t permanently die but do lose some items you have gained. While the combat isn’t overly complicated, going in with a tactical approach will give you a huge advantage. There are five different weapons in the game: a sword and shield, fist Weapons, a spear, a greatsword, and a bow. The only weapon that can block is the sword and shield, which was designed for defensive play. On the other hand, the bow has ranged attacks and the spear knocks enemies back. You can only bring two weapons into battle, and learning the enemies’ weaknesses is the key to victory. All weapons and armor can be upgraded for a hefty fee back in town. 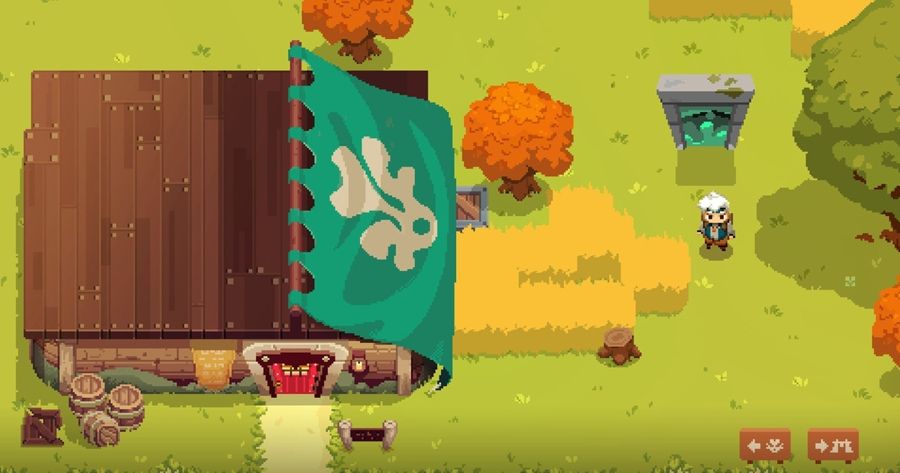 When diving into dungeons, you will find a bunch of items you want to bring back home. However, some of these items have curses on them. There are a few different ones in the game, such as breaking the item next to the cursed item, transforming the item in a specific direction into the item that is cursed, or even an item that teleports one of your items home. Inventory management is a huge part of this experience, but is so easy that no one will complain. You can move stacks with one button, split items very quickly, or even just trash items for extra cash with no trouble at all. Inventory management like this is something most triple-A companies can’t get right, and the development team pulled it off with ease.

Speaking of the town, it starts off somewhat empty. You are the only shop in town until you start paying others to come join you. You can pay for a blacksmith, alchemist, banker, decorator and even another shop owner to join you in your village. The blacksmith can be used for upgrades, and the alchemist will make you healing potions to keep you alive for a longer period of time. With the decorator, you can decorate your shop for specific buffs like additional tips or even more customers. The banker will take your money and invest it, but there is a chance you will lose more than you gain. The other shopkeeper charges ridiculous prices, but if you need one or two items, it can save you a dungeon run. On top of all that, you also have to upgrade your shop so you can place more items and invite in more NPCs to sell to. You will always have something to keep you busy in Moonlighter.

Selling items is not as simple as it sounds either; you need to find the right price. If it is too high, the customers get mad, and if it is too low, you lose out on cash. So how do you find the right price to sell an item? Your journal has the highest price you tried to sell an item for and the lowest price you sold an item for. With the press of a button, you can place your item on the shelf and then look in your journal to see what prices you have tried already. When you find a price you like, the price will stay the same from the last time you stocked it. It might sound like a little thing, but it saves a considerable amount of time. There is one thing you have to watch out for though while selling items: thieves. If you catch them, you can rough them up and get the item back, but if not…I’m sure you can guess what happens. 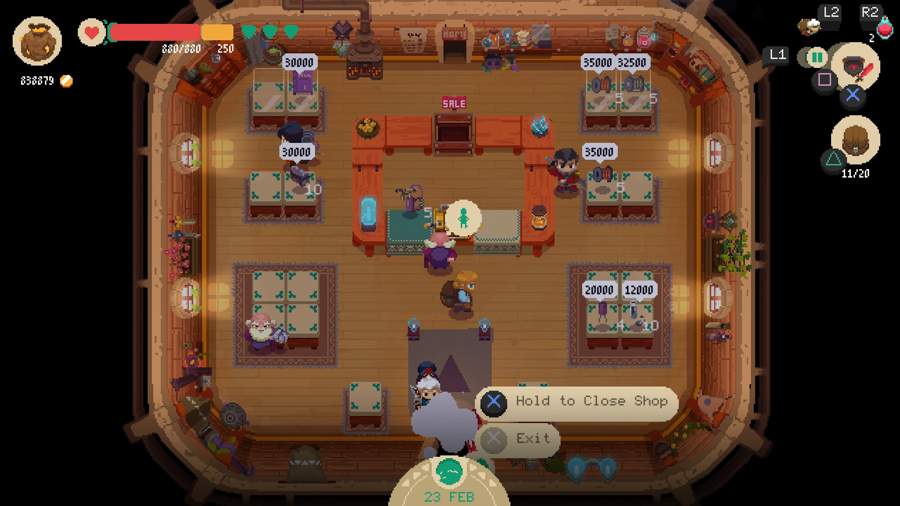 In my about 20 hours of playtime I have experienced one glitch that made me restart the game. I had one crash when entering a dungeon, so I didn’t lose anything. I do want to mention that there are a few little things that improve your quality of life of Moonlighter. First off, if you have the items in your box, you can craft without having to go grab them. Second, when you return from a dungeon you warp right next to your store, so you don’t have to run around the whole town. Finally, you can hire a shop assistant to sell your items for you while you go back to dungeon diving. You can tell that the team working on this game has played a number of games in the past.

Moonlighter is an exciting action adventure-shop simulator game that shouldn’t be skipped. If you have any interest in running a shop and dungeon diving, then this game is for you.

This review of Moonlighter was done on the PlayStation 4 Pro. A code was provided by the publisher.

After countless delays and betas, the world of Amazon Game Studios and Double Helix Games' New World has finally launched. Is this MMO a train wreck like Amazon's previous attempts, or was it worth the wait? Check out our review and find out.

90s kids are no doubt well-versed in Super Smash Bros. and Nickelodeon cartoons - it’s the stuff sleepovers are made of. The folks at Ludosity (of Slap City fame), Fair Play Labs, and GameMill Entertainment have crafted up a nostalgia bomb with Nickelodeon All-Star Brawl, a platform fighter chock-full of Nicktoons legends. Does this tribute work, or does it deserve a one-way ticket to the Slime Zone?

Following the release of Missile Command: Recharged last year, Adamvision Studios, SneakyBox, and Atari have some nasty critters in their sights with the release of Centipede: Recharged. This score chaser made a name for itself in arcades the world over - does this remake keep the spirit alive?

Does Far Cry 6 build on the foundations set by its predecessors, or this just yet another romp in the jungle?
ShareTweet
Tags
Game Reviews Johnny Hurricane Reviews PlayStation 4 Reviews