With the recent influx of indie games, Dead Cells leaves Early Access to fully enter the fray. Does this Metroidvania hold up against other contenders, or should you check out another one? Check out our review and find out what we thought.

Dead Cells does have a story, but you have to find it in bits and pieces around the world. You are a prisoner who is trying their best to escape. A disease has taken over the island, and it has turned all the inhabitants mad. The sickness has struck the inmates, the guards, and even the king himself. You are one of the lucky ones, if you can call it that. As a slime, you can take over a corpse and attempt to escape by climbing up the tower. Every time you die, you start back in your cell and can start the escape all over again. It is up to you if you actually make it out or not, but the climb might drive you mad.

As soon as you are free from your cell, you will get your weapons and push on. You can have two weapons and two items. Weapons are broken up into melee, ranged, and shields. Items come in various forms such as bombs, turrets, or traps. On top of that, you have your dodge-roll to avoid damage. Rolling can help you dodge attacks and get behind enemies. The real key to the combat is mastering the dodge-roll. You can heal, but it is limited early on and if you die, you lose all your equipment. Making it to the end of the level will result in a full heal, and your potions will be restored.

Both weapons and items will have levels and perks attached to them. With the stats and perks, you can tweak your build however you want. Some perks let you do more damage from behind, while others make targets bleed. If you can synergize all of your equipment together, you will hit like a truck and bring down even the fiercest enemies. However, if you choose the wrong perks, you might mess up your build. For instance, if you make an enemy bleed and try to freeze them, the bleed cancels the freeze out almost immediately. If they thaw out too soon, you might miss your window to strike your opponent for massive damage. Sometimes you just have to search a little more to find the right equipment. 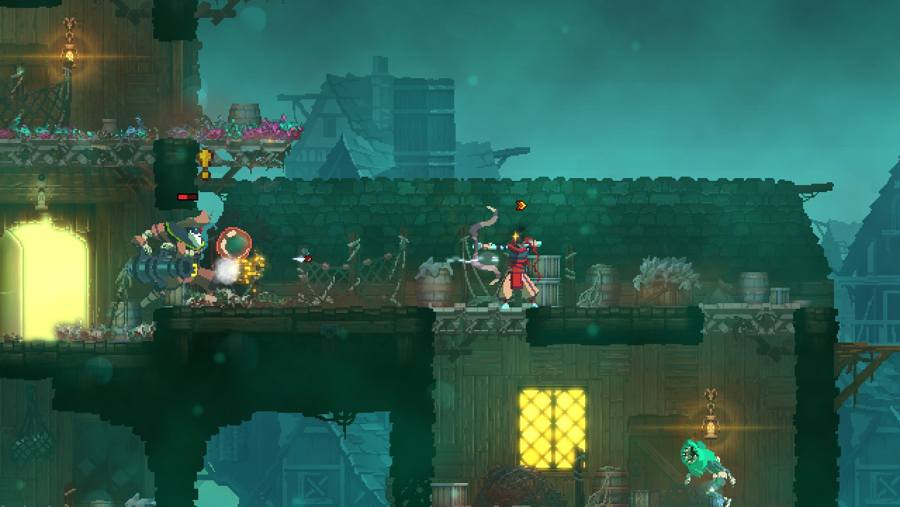 On top of finding new equipment while exploring, you can also find secret areas and new routes. Some of these routes are blocked off until you find the right rune. These runes give you new moves such as a wall jump, which will allow you to access new areas. These areas are generally more challenging, but will also net you more Cells. With Cells, you can unlock new equipment to start with, as well as other permanent Perks. Perks and Equipment are the primary form of progression in Dead Cells, and will keep you coming back for more. If you die before making it to base though, you lose the Cells and cannot get them back. Sometimes you have to decide if it worth losing them all to get a few more.

While the primary grind is getting through the tower and escaping, there are also daily challenges you can do. These are procedurally-generated dungeons that have a time limit attached to them. You are given random equipment, and the idea is to rack up a high score and kill the boss before the time runs out. If you can beat it, you will get a blueprint, and if you can beat it multiple times, you will get even more. The enemies are generally some of the higher level creatures you will face in the game. You don’t have to do these, but it does give the game a longer shelf life with extra content.

I do feel like I should bring this up, because when I hear the term Metroidvania, I am always worried about the platforming challenge. Some optional challenges are on the hard side when it comes to platforming, but you can skip them. However, the main game is very lenient when it comes to jumping. The core of the challenge in Dead Cells comes from the combat and the occasional trap. There is also a diet option, so if you don’t want your character to eat meat, you can change it.

This review of Dead Cells was done on the PlayStation 4. A code was provided by the publisher.
ShareTweet
Tags
Game Reviews Johnny Hurricane Reviews PlayStation 4 Reviews