The Silver Case is a rare breed of game that is a breath of fresh air in today's gaming landscape. The gameplay elements are somewhat rigid, but fans of gritty crime dramas or Suda51's distinct style will find a lot to like here.

The world of The Silver Case takes place in the 24 Wards in the year 1999. 20 years ago, Kamui Uehara assassinated many key government figures in what would be known as “The Silver Case.” His actions made a lasting impact, and the case is still talked about to this very day. As your self-named character (lovingly nicknamed “Big Dick”), you join the Heinous Crimes Unit, which sets out to tackle what incidents may occur in the city and find out more about what happened so long ago. It’s a complex tale, with many key characters, situations, and pieces of information to keep track of. However, those who take on this tale will be rewarded with a rich world full of backstory and character. Much like Suda51’s other works, everything is a little out of the ordinary, but not so much that it negatively impacts the game. It’s surreal, rather than obnoxious.

This 10 hour game is divided into different cases that explore a different incident. One case may have you exploring nightclubs for information on bohemian internet groups, while another may deal with a kidnapping of a high-authority figure. Despite their seemingly standalone nature, each brings some more backstory into The Silver Case and brings more depth around the members of the Heinous Crimes Unit. Every character has a unique personality and backstory to them, which are explored through non-sequitir conversations in cars, batting cages, and other areas. Even little things, like Kusabi’s financial hardships or Morikawa’s immense 100 question kumite knowledge, contribute greatly to the game’s character development. The game also plays with your expectations of each character – how you feel about somebody one minute may change later on. 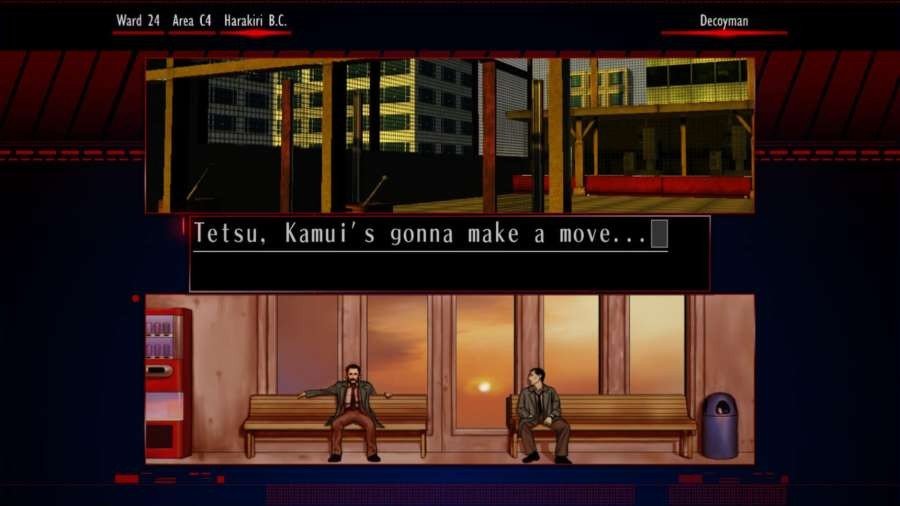 As a visual novel, the game requires a lot of reading. This isn’t necessarily a bad thing, as the plot moves briskly and covers multiple characters and situations at any given time. Things are presented with comic-book style panels of each situation, interspersed with anime and live-action clips. It’s very stylish, and the fact that the theme changes every case adds some extra attention-to-detail. Video can be somewhat grainy at times, but this is just a minor fault.

There are some light gameplay elements to The Silver Case as well. Players can explore areas using a four-directional navigation system, and also interact with items via “Contact Points.” It comes across as rigid, and feels very limiting. The areas you explore are somewhat barren and can get repetitive, especially when there are multiple floors of a building that look the same. There is some puzzle solving, but the option to instantly get the solution is available. These moments admittedly add some variety, but the star of the game is most certainly the story.

The Silver Case is a rare breed of game that is a breath of fresh air in today’s gaming landscape. The gameplay elements are somewhat rigid, but fans of gritty crime dramas or Suda51’s distinct style will find a lot to like here.

This review of The Silver Case was written based on the PlayStation 4 version of the game. A code was provided by the publisher.
ShareTweet
Tags
Casey Scheld Reviews Game Reviews PlayStation 4 Reviews